This images was added on December 5, 2013, and has been viewed 694 times and downloaded 127 times .
You can see more images similar to this one from right side bar. 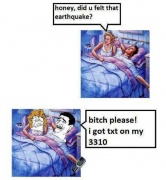 honey did you felt that earthquack